surely you must be sick of telly by now (and don't call me shirley) so how's about a go at creating your own pictures in your clever old noggins as you listen along to the most marvelous sherlock holmes adaptations you'll find anywhere ever great detective or not.
originally broadcast on radio four and starring clive merrison and michael williams the whole darned collected stories now live in a big box of cassettes that i'd carry with me always if i had a bag big enough but instead are guarded by particularly vicious monsters under the bed. i assume there are cds of them these days and i can't recommend them enough.
it's watson that is the heart of these for me - his honour and loyalty and love for his friend, and the best stories by far centre on the relationship between him and holmes rather than some mad impossible mystery or foul crime. and i love how they exist as fictional characters within the stories themselves, how we're being let into their real lives. oh and all sorts of other things. i'm rubbish at explaining why i like stuff, especially when i'm not in a dingy boozer with a glass or three of something lovely.
so listen for yourselves.

the casebook of sherlock holmes - the lion's mane 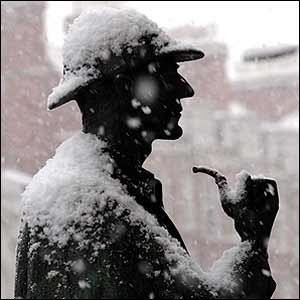 Ooh. I'm going to listen to this when the 'cold snap' comes in and it's all logfire and blizzard hereabouts.