we party heavy up heah 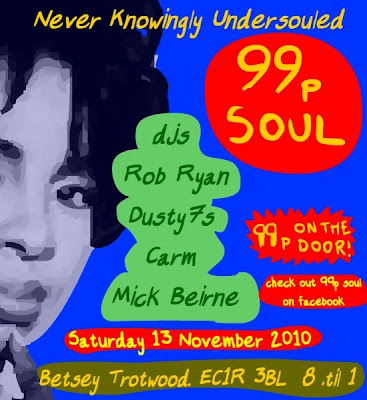 okay okay so the 99p soul build up proper starts now now now the new shoes are getting worn in the everything else to go with them is still a shopping hater's nightmare to come the invites are sent and it's time to welcome cutter outer extraordinaire and all round brave little soldier (not even pneumonia can stop him wowing a crowd oh no no no) hot from ryantown mister rob ryan is very flipping self... dancing away at top speed... 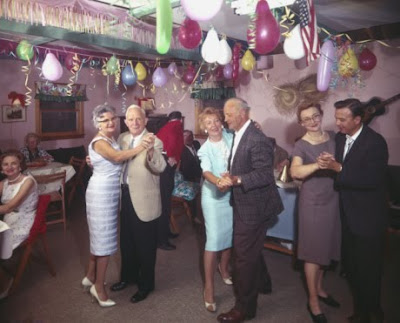 "these 7's are my fave sounds today, they might not be tomorrow, but right here in the now they are !! I dont know what a Sadity Lady is and I'm a bit horrified that I'm buying very jazzy sounding disco records by a band called TEAKWOOD !! and It's a bad feeling is the saddest reord I've ever got down to, the musical equivilent of the movie 'Precious', "Hold your head up like a barnyard strut - one day little girl you'll come out of the rut""

"Who were the people that made these records, these things of heartbreaking beauty, not knowing facts imagination comes to the fore ! I see the Sherrell Brothers on stage, one sings one plays the guitar constantly at war with each other to take control of the song - both win - it's the greatest draw ever known !
And Windy City from the Windy City, well, they just came to party."
the price - sherrell brothers - currison
we party heavy up in heah - windy city - innovation II

Ralph rocks the gals at Ryantown HQ so much that we have to put some water on their funky shoes to cool them off ! and as for Christian Plicque, well it has all ! That is if you like records with whispering in them, flute solos and continual use of the word 'Foxy', does this make me a sexist jazzersizin' creep....well what can I say - guilty as charged !"
cool off the floor - ralph young - goldband
hot foxy woman - christian plicque - lacam

do pop along if you like. it'd be lovely to see you

What a mix - I'm particularly sold on Christian Plicque. Creepy and compulsive.

I just want to know how they found you.

ain't it just. ralph young and teakwood are my top picks so far but it's a blinder all the way.

and hell i can't even find a chuck jackson and maxine brown lp so what the hell are the chances of ever turning up mysteries like this lot ?

Like lost gold of the Incas. Unspeakably splendid. Thank you Mister Rob.

'Hot Foxy Woman' works for me despite/because of the Jethro-Tull-On-Viagra moments. I'm getting teakwood!

I like the ones Rob feels guiltiest about - he should release the jazzy beast.

Ooooo what a lovely collection of floor-heating sounds! And, yes, where does he find them?? The Rob Ryan vaults are an international treasure indeed and it's a category all of itself - Ryan Groove, in my books. Thanks Rob, and thanks Ally. Look forward very muchly to seeing you at the next 99p.

Wow! I am flabbergasted! I wrote and sang lead on "Suddenly You're My Life" when we (Teakwood) recorded it in 1976 near Atlanta, GA (USA)! I would love to find out how this record got into distribution. We were very young then!! We recorded an album in 1977, but it did not include "Suddenly" or "Can You Dig It". It, also, was NEVER released! It's called A DISTANT STAR! I hope to hear from someone VERY soon!!!

fred dear you're a star - what a wonderful. I'm waiting for the darling rob ryan to spill the beans on where he came across 'suddenly...' and i'll be right back to you.
thank you ever so sir
x

Thanks, Ally! My good friend, Berry Wilson, fellow member of Teakwood who wrote the flip side, "Can You Dig It?", also happened upon this website around the same time I did! It's incredible that 35 years after recording it and with, what we were told, a very limited number of copies printed, that our record seems to, finally, be a hit!! LOL!

Hi Fred and Berry,
Hope things are good. I bought your INCREDIBLY FANTASTIC record from a friend around a year ago in London (England) I think he bought it on ebay from the states, I wont tell you how much I paid for it cos my wife might read this and beat me with a pool cue, it's given me many hours of happiness tho - Thank you!
It was on a mix cd we took on holiday last year and as we drove around the hills in Cyprus the kids in the back loved singing along with the 'ooh ooh ' bit, as I did too !
Best Wishes and thanks for your great music guys !