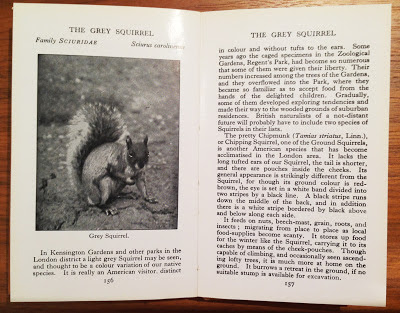 round about january or so most years i'm determindly not making resolutions not drinking less or running about more pretty darned sure there'll be let up in the putting off mooching about atery and brain thickening but i'm think this time or perhaps the time before i may've mummbled something about animal facts. i was going to learn some animal facts. possibly even learn some things aboout other things too but that seems insanely overenthusiastic. i have learned some animal facts too. well i've read a book and i thought it'd be nice to share the highlights. well done the observer's book of wild animals of the british isles. every home should have one.

"in kensington gardens and other parks in the london district a light grey squirrel may be seen, and thought to be a colour variartion of our native species. it is really an american visitor, distinct in colour and without tufts to the ears. some years ago the caged specimens in the zoological gardens, regent's park, had become so numerous that some of them were given their liberty. their numbers increased among the trees of the gardens, and they overflowed into the park, where they became so familiar as to accept food from the hands of delighted children. gradually, some of them developed exploring tendancies and made their way to the wooded grounds of suburban residences. british naturalists of a not-distant future will probably have to include two species of squirrels in their lists."

And look at how the pesky things drove out the reds! Tufty! Where is Tufty?!

Delighted Children there - three more from them later.

PS: I have the Observer book of Dogs. But now I am more of a cat person really.

i've got the observer's book of mosses and liverworts but i'm more of a cat person too.