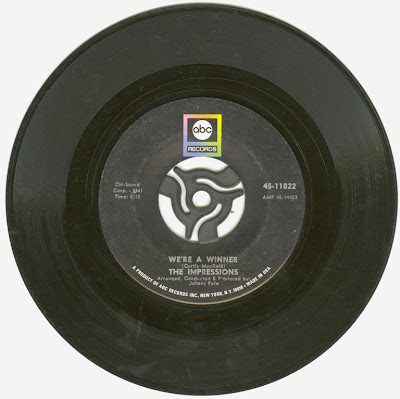 the contrast podcast crew have traveled back to 1967 this week without ,thank gawd, the merest hint of moptop and only a drop or two of pachouli.
for me it was the easiest one to pick a tune for for a while. the impressions 'we're a winner' has been somewhere very near the top of my singles pile since my pal richard first introduced me to the glorious pleasures of curtis mayfield and suffers terribly from being played at pretty much every do i've ever played records at.can you imagine this being practically banned by radio at the time. idiots. it's only competition came from the wish to remember john coltrane, who died that year, even though it's really the piano beauty of mccoy tyner that makes me melt, and the village hall disco floor filler of my youth 'there's a ghost in my house'. it's tunes like this that make me want to flatten every idiot that still spouts the tragic drivel about the beadles inventing music...

so freedom sounds, northern floorshakers and modal madness it is then

the impressions - we're a winner

r dean taylor - there's a ghost in my house

I've said it before - great choice. Curtis Mayfield always radiated a unique warmth - even the black consciousness anthems feel inclusive. I saw him play live a couple of times in the 80's before his accident. One time he did a cover of Lionel Richie's All Night Long - and he pointed the mic at me and my mate and made us join in during the chanty bit!

I have a re-issue copy of We're a Winner, with Keep on Pushing as the double A side.
I always thought they should have used that it as post match music at a football club. A side for victories, AA side for draws and losses.

I submitted The Zombies - This Will Be Our Year for the 1967 Contrast podcast which, frankly, would have been perfect, if I say so myself, but I think I sent it too late for consideration.
Still I've managed to get a song accepted for the next one "Young" - so I'm dead chuffed.

Hmm. I never got James's submission for the 1967 one. I know my email can be fishy sometimes, but it usually lets people know whan tthings are bouncing. :(

Thanks for your submssions recently Ally. You are a welcome vopice on the cast. :)

Dammit James, you got me channeling Lionel Ritche again...