she's been a scrubber all her life 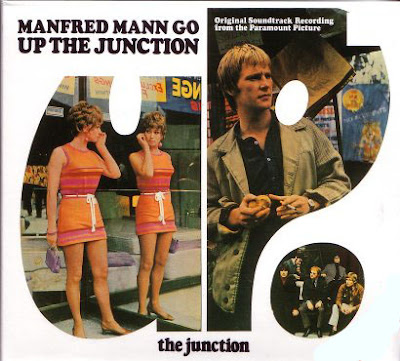 apparently purple rain is the best film soundtrack ever. i didn't get as far as finding out who decided this what with all the seething and cursing and general unreasonableness. everyone knows it's superfly. everyone. then there's a great big pile of one from the hearts and morricones and the harder they comes and even grosse point blanks for gawds sake. and up the junctions.

the pretending life's a song gang were drooling over suzy kendall last week, like you do, and reminded me to dig out my manfred mann lp. i know it should make me think of sixties south london but it actually takes me right back to san francisco 1999 where my dearest old pal played it daily with some champion singing along and mad dancing. and of dennis waterman who's managed to be in three of my favourite telly shows. and of how i've not seen the bloody film. how i've missed it all these years is a mystery but there you go. anyhow i think we'll have a week of film music to encourage whoever it was that made a crap list to have another go.

manfred mann - up the junction

"'ere Rube, you and Sylvie get on the mike and give us a belter!'

Three cheers for the OTHER fanciable Liz Fraser.

Yes well E4 had the Verve in the top 20 Lp's ever so there you go. Shall we exclude musical bio pics here's my two penneth.
My fave is The Long Riders by Ry Cooder. we should also mention Roy Budd's Get Carter and of course John Barry. Also can it be good soundtrack if the films rubbish?

Get Carter is a killer soundtrack,
And Mahoney's Last Stand - by Ron Wood, Ronnie Lane is a great lost soundtrack.

Coppola's "One From The Heart" is a top contender for great soundtrack/rubbish film.

I was forgetting the westerns, I love the theme the Big Country, Magnifcent Seven of course(Elmer Bernstein) anything where the cavalry sing basically.

ah never forget westerns - i do like a western.

Paint Your Wagon is pretty wonderful, if only barely a Western. You can't beat Clint Eastwood in a flowered shirt and wide-wale cords singing "I Talk To The Trees". Bonus points for the kinky polyamory storyline.