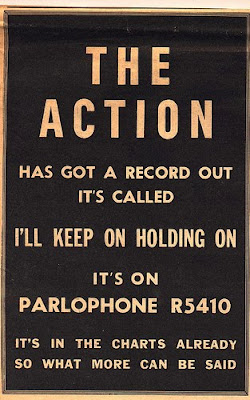 lagging desperately behind as usual but we really do need to stop and raise a salute to mike 'ace' evans of the the action. that ultimate action lp has been right near the front of my record pile for all of it's thirty years (oh jeez thirty years thirty too fast years) more consistently now i come to think of it than pretty much anything else. blimey. i don't think i'd really realised that before. it's not just got looked at neither but played to pieces (most especially by the mrs these last few years since they became her go to beat group of choice). it paved the way for me kinda for all those tremoundously wayward rocksteady soul covers all ever so slightly off centre all misheard lyrics and out of tune backing singing - i guess trained my ears for all that magic and at the same time made the thrill of first nights with the marvelettes and the temptations and martha reeves originals even more breathtaking. it was the weller sleeve notes that brought it too me obviously and i'm beginning to think that might be the greatest thing he ever did.


the action - i'll keep on holding on

When I first got into the Mod thing seriously, around 83, an older mate who was seriously into it all lent me things like All Mod Cons and this album. I love it to bits, especially those sleeve notes. And I actually prefer their versions of I'll Keep Holding On & In My Lonely Room (with it's headstart for happiness opening riff..).

Meanwhile the album Rolled Gold, which is old demos and unreleased bits when they became more psych is worth a listen too. Some great songs..

Ah you're so so right. I'm in the bizarre position of having lent my copy to Reggie. It's a long story. But he returned it all repaired sleeve wise and signed which I thought was quite lovely.

All that and George Martin too - marvellous

the tv clip is excellent where was the club at the end with the modernist stairscase and abstract paintings looks like they played at the hayward gallery. cheers

The stuff on the Rolled Gold album isn't actually very heavy. It lands somewhere between what they did before and the later end of The Creation. It's actually very melodic sunshine psych pop. Well worth a listen.

Ah they really were good. I sometimes forget how long I've liked them for, they had something very special.

Oh Ally it's a story you couldn't make up. My mum was on a course for the unemployed with Reggie back in the '80s, and no one there believed he'd been in a group until I fell off my chair when she mentioned his name and showed her the records.
Simon's right about the later stuff. There's a fantastic CD of BBC recordings too. But what about the earlier stuff? Recognise these Boyfriends with the adorable Sandra? http://www.youtube.com/watch?v=tmN0yrhDfWQ