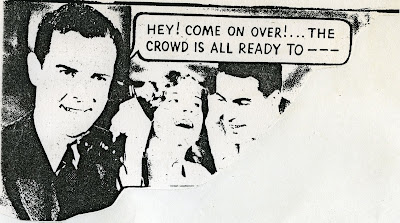 how does this sound ?

i know. it's like christmas on acid. for gawd's sake. still at least old piller's playing records so that'll be nice. there's go go girls on podiums too apparently. well there were last week when it was all supposed to be on till nine. we'll be wandering about the place tutting and being despicable elitist snobs then retiring for something warming down the red lion if anyone fancies it.

Ah man I would be too, but I've got to be home tomorrow evening, and a 7pm finish in Carnaby Street turns into a not home until at least 10pm in the West....damn!

Shame I was up in that there West end tonight, thought the lights on Oxford st were better then most of the recent efforts. Will swing darn carnaby st soon loved the giant snowmen last year.

Is a strident swinging sixties denier a sort of tights?

Who needs to presume kaftans when the electric sitar is out there for all to hear? Psychedelic case proven! (There's probably a really good mix to be made of Songs With Electric Sitar On. Even Dusty would get a look-in..)

Great tune. Where should I start with Rotary Connection if I've only got Black Gold and Les Fleurs on a Minnie comp?

Have you ever heard that Phil Upchurch guitar instrumental of Black Gold? Fantastic.

Did you make the Carnaby scene? Any good? How was Piller's set?

aladin that this one's off of is bonkers but brilliant and there must be a best of comp out there surely. If stepneys involved there's always going to be something worth a go.

and the carnaby do was right up there with the most pitifully unswinging happenings I've ever encountered. A few dolly birds wiggling badly and looking chilly, polled playing James brown to a few baffled tourists. We had a tiny gawp then retired to the red lion with new bloggy pals and an old one too