why are there easter bunnies and eggs and stuff ? 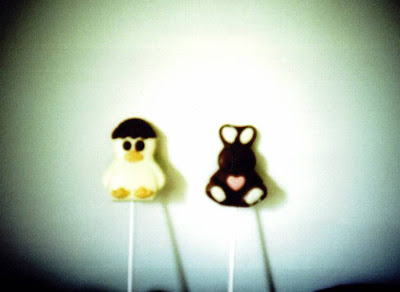 last year there was a bit of media hoo hah about easter and no one knowing what it was all about and how we were all a national disgrace and stupid scum and whatnot so this year to save you any embarrassment when the daily mail pop round to quiz you i thought i'd fill you in on all the top facts. i mean easter is tricky (not like christmas which is easy - it's father christmas's birthday so it's called christmas, stupid) but my understanding of it is that there was this jesus kid who could do miracles and he didn't like eggs so he turned them into chocolate when his mum wasn't looking and he had a pet rabbit cos he liked rabbits but one day the rabbit got in the way when he was turning an egg to chocolate and the bunny got turned to chocolate by accident and then later on some blokes killed jesus and put him in a cave but like in ET and the terminator and that he wasn't really dead but he couldn't get out of the cave cos there was a boulder in the way so he turned the boulder into a chocolate egg and ate it so he could get out so thats how we get easter eggs and chocolate bunnys and stuff. and the fish get the money... (stan laurel taught me everything i know)

anyway...bunnies and chocolate and jesus and that...

echo and the bunnymen - crocodiles (live)

i thought i'd have loads of tunes about chocolate what with it being so universally adored and all but i don't. well i never. i've got this though from the monday nights dancing to the same records every week at norman jays thing at the bass clef when hoxton was still shoreditch and the london apprentice had the scariest dark room ever (you don't want to know really you don't)

and who wouldn't like someone who could turn stuff into chocolate and booze (although there was that thing with the bunny which was a bit careless and there's all those funny folk who say they like him but are generally horrid about pretty much everything else and there's some frankly bizarre god business (what the hell's that about...)

i hope that all helps
x

Thanks for clearing that up about Easter, by the way. I'd always wondered what that was all about so it's good to finally have it explained.

Speaking of Blasphemy am I the only one is disappointed when Tom joins in doing his faux tramp singing I always prefer the versions with just the guy on his own. Does anyone know his name?
ps not wanting to get doctrinal but isn't the underlying message of Easter to be nice to chocolate and go to the garden centre?

bltp - no, you're not. The music is lovely on both versions, but I just really like the idea of the original being a beautiful monument to this unknown and unsung tramp. It's all about him. There shouldn't be a celeb muscling into the frame, even Tom Waits.

ally - I used to see jazz gigs at the Bass Clef, end of the 80s, start of the 90s. Nice venue. Funny to remember what a windswept wasteland that corner of town used to be. I always thought the hoary old dungeon queens coming in and out of the Apprentice looked a bit scary. Clearly you know more. (Scratches chin thoughtfully).

i know i know everything went a bit wrong cobbling this tat together - buggered about laurel and hardy and the only version of that gavin bryars thing i could lay my hands on at short notice.
i only went to the london apprentice once with thoroughly bad company. it was fabulously awful and i wouldn't've missed it for anything. i can still smell the poppers.

Ally I'll post a "waitless" version if I can find it tonight and send the link ;)

Thanks for clearing up all that about Easter. Now I understand why the vicar round my church nails bunny rabbits to crosses and gives out creme eggs for communion...

Ally: soz i was talking up my Gavin Bryars collection my double cd has two version of "jesus blood on it" both with Mr waits sadly, one of thems a single version, I would have loved to hear Bruno Brooks introducting that one.

I did always wonder about Easter. I still don't understand why it has to move about though. It never stands still. No wonder nobody knows whagt it is all about. And I wish Baby Jesus would've turned the boulder into Marks and Spencer wine gums cos I don't really like chocolate.

I was lucky enough to see Gavin Bryars do 'Jesus Blood...' at a gig at the Barbican a few years back. The tramp couldn't make it so they had him on tape.

There is a great cd out with that track (sans Waits) and a brilliant track called 'The Sinking Of The Titanic'. It's well worth a check out.

I've been unable to visit for a few days, so apologies for being late.

I never knew that about Easter and I thought I knew everything. So thank you so much.

You make it sound OK to eat chocolate.